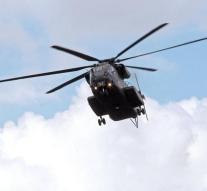 warsaw - Poland took last week the angering of France by deleting a large order helicopters to the Airbus group. Warsaw on Tuesday announced that it now has ordered helicopters at a local factory Sikorsky.

These are two devices that will be delivered this year and eight next year.

French President Francois Hollande dropped last week upset a line by visiting Poland after it became known that the big order at the Franco-German aerospace group Airbus was canceled. Warsaw would be converted over 3 billion purchase fifty Caracel helicopters. Airbus won an order in August 2015 on hold.

The Government of the eurosceptic Law and Justice party (PiS) deleted the order which was done by the previous government. The argument was that the current government would rather award the order to a company that makes construction machinery in Poland. That argument is now being put into practice.