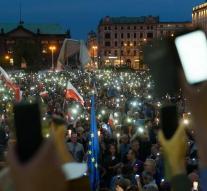 warschau - Thousands of Poland went to the streets in the streets to protest against the judicial reforms of the Recht en Rechtvaardigheid (PiS) government party. Which, according to them, end the independence of judges and undermine democracy.

The Polish parliament, in which PiS has a majority, adopted a law on Friday evening which gives the public representatives greater control over the appointment of judges. According to the critics, this is a violation of the constitution, which prescribes the separation of powers.

The conservative and eurosceptic party of Jaroslaw Kaczynski also launched a bill last week to replace all Supreme Court judges except those elected by the Minister of Justice. 'Shame, shame,' protested the protesters in Warsaw, waving Polish and EU flags. They called Kaczynski a 'dictator.' '