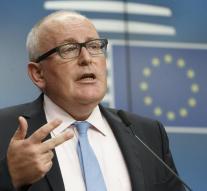 brussels - The Polish government says it wants to talk with EU Vice President Frans Timmermans about the conflict of the rule of law in the country. 'I think this handbook is encouraging and hope to receive the Polish ministers in Brussels. I am also willing to travel to Warsaw so that we can conduct this dialogue, 'said Timmermans.

He said that after a meeting with EU ministers he explained the state of affairs with Poland. He said he gets 'wide, wide' support from EU countries for the way he tries to find a solution.

The commission and many Member States are concerned that four new laws to reform justice threaten the independent rule of law in Poland. Monday morning, President Andrzej Duda presented his own proposals after voting on two laws in July. Timmermans said they would study and comment.