Home / World / Poland does not want a punishment for Hungary 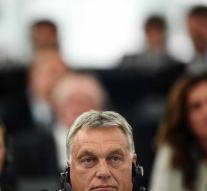 warsaw - Poland wants to prevent European sanctions from being imposed against Hungary. According to the Polish Ministry of Foreign Affairs, measures against Member States of the European Union only have the effect of increasing divisions in the EU. 'As a result, the confidence of citizens in European institutions continues to decline.'

A majority of the European Parliament voted Wednesday to activate the toughest criminal proceedings against Hungary. The developments in the former Eastern Bloc country pose a 'systemic threat' to European values, according to the parliament.

The Polish ministry says that 'every country has the sovereign right to implement internal reforms that it deems appropriate. 'It comes as no surprise that Warsaw expresses support for the government of Hungarian Prime Minister Viktor Orban. There is also an Article 7 procedure against Poland, which has been activated by the European Commission.