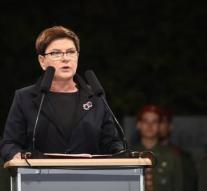 krynica zdroj - Poland will continue to refuse to allow immigrants according to a European Union redistribution regime, Prime Minister Beata Szydlo said Wednesday. This despite a ruling by the EU Court of Justice that Brussels has the right to force Member States to include asylum seekers.

'I was convinced that such a decision would be taken, but this does not change the attitude of the Polish government to migration policy,' said Szydlo to journalists in the margin of a business conference.

Earlier on Wednesday, the supreme judge of the European Union will have complaints from Slovakia and Hungary about EU migration policy.