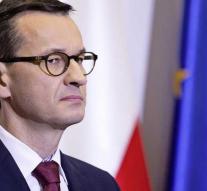 warsaw - Polish Prime Minister Mateusz Morawiecki canceled a planned visit to Israel. That has been announced by a spokesperson for the Polish government.

The Polish government is displeased by a comment from the Israeli Prime Minister Benjamin Netanyahu, who said that Poland cooperated with Nazi Germany during the Holocaust.

According to a spokesperson for the Israeli government, Netanyahu was misquoted and he did not mention Poland as an accomplice to the persecution of the Jews during the Second World War.