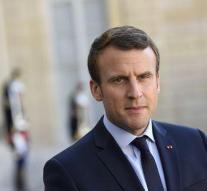 brussels - Poland and Hungary responded to criticisms of French President Emmanuel Macron on Thursday. He said this week that EU Member States who ignore the rules should feel 'full political consequences'.

The president complained in an interview with eight European newspapers about countries that put EU subsidies in their pocket while not respecting European values. According to Macron, the European Union is not a 'supermarket' where countries themselves can choose which parts of the membership they embrace.

Those comments fell badly with Hungarian Prime Minister Victor Orbán and his Polish ambassador Beata Szydlo. Macron 'thought yesterday that he could kick the Central European countries. That's not how it works, 'said Orbán, who is regularly in Brussels with Brussels.

Szydlo accused the French leader of the media to show a negative attitude towards central European countries. 'It's good to talk about facts, instead of using stereotypes,' she said.