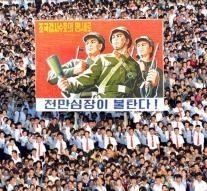 - Economically, North Korea does not suggest anything. But the conflict with the US can lead to a trade war that is world-wide, thanks to the mutual dependence between China and the US patron.

North Korea is among the poorest countries in the world. The central bank of South Korea estimated the gross national product in 2016 at about $ 30 billion. That is 2% of South Korea's economy. Annual income per capita is $ 1. 300, only 5% of that of the average South Korean. Although it is difficult to make a precise estimate, North Korea has not reported any economic figures since 1965.

Lifeboat of the strait country is China. Over 90% of what imports North Korea come from China, from medicines to trucks and electronics. Almost all exports go to the mighty neighbor, North Korea exports mainly coal and cheap labor. Reuters reported that China used North Korean factories to make cheap clothing, which is exported with a label made in China.

The second economy in the world does not stop the poorest country in the world, China has strategic motives, Rabobank writes. If there is no food, fuel and medicine going to North Korea, there is a humanitarian crisis. Certainly now the region is affected by drought, which means that the harvest is smaller. Lack of food leads to an influx of refugees, where China is not waiting for it.

In addition, China wants to maintain the regime in Pyongyang, in order to prevent it from getting a US ally at the national borders. In addition, North Korea is rich in soil taxes, such as gold, zinc, copper and rare metals used in smartphones.

'The estimates of their total value range from $ 2000 to $ 10. 000 billion 'says acknowledge. 'North Korea has neither the money nor the knowledge to exploit this on a large scale. China can do this. '

But the rest of the world hurts over the close links between Beijing and Pyongyang. Giesbergen: 'In June, the US imposed sanctions against the Chinese Bank of Dangdong. China needs to love choral dances between North Korea and, on the other hand, do not hate the United States. '

At the same time, the US must also be careful in order to avoid economic damage. China is the largest holder of US government bonds, explains Erken. 'That is one of the reasons, for example, that the US has not yet introduced any protectionist measures. '

Giesbergen calls the conflict a top-level poker game: 'The effort and risks are getting higher. A few wrong steps can lead to a trade war. '

Its consequences will be worldwide, says Rabobank economist Philip Marey. 'After decades of free trade, production chains are spread worldwide. This means that when a country imposes import tariffs, everyone is suffering from it. '

The stock market also suffers from the conflict. Marey: 'At new tensions, the euro and the Swiss franc are a safe haven, just like US government bonds. That may sound crazy, but the chance that you will not get your money will be very small. In addition, that market is very big, so you can easily recover your money. '

This week can recharge the conflict. Today, military exercises are being planned by the US and South Korea. Friday is a national holiday in North Korea, which is usually celebrated with nuclear tests.