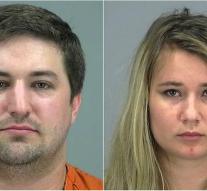 - A man and a woman from Arizona have left alone at home their children so they could play in the district Pokemon Go. The toddler was only one and a half hours without water in temperatures above 35 degrees. They are charged with neglect, the Pinal County Sheriff's Office reported.

Officers found the two-year old son Brent and Brianne Daley (27 and 25) late Thursday night. A neighbor had called the emergency number because she had seen the boy. He walked outside barefoot, his face was red, he was dirty and wearing only a diaper and shirt. In his house were agents of father Brent phone. When she called him, his answer was,, so what 'and he hung up.

Parents stuck. The child is taken care of by youth in Arizona.