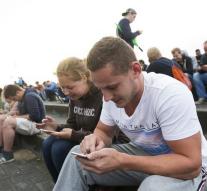 amsterdam - Hunting Pokemon and burglars. Regarding the police can go well together. But the calls from agents to players of Pokémon Go Direction varying effect.

Several police called players of the hugely popular game, which is hunted virtual animals in the real world, on social media to keep an eye on in their neighborhood. Especially in the evenings and at night. Last Friday still twittered the Hilversum police officer Jeffrey Cijs: 'Last night we saw a lot of people on the hunt for Pokemon. If you see anything suspicious, call 112 please. Extra supervision, everyone happy. '

The response to the call are positive, he notes. 'People are often ignorant when it comes to the call about suspicious situations. What explanation does almost all positive. Now the reports yet. '


Success varies, according to a tour of several cities. Vlaardingen example gamers repeatedly proven their value in a special WhatsApp group. 'Thus, the local police officer has made a call with respect to a bicycle thief which was recognized by members of the group. Conversely see members of the Pokémongroep ever run someone they suspect happened to find 'a spokesperson. The Pokémonjagers certify animal lovers; they drew the attention of the police documents baked sponge, usually a weapon of a dog or cat hater.

The corps in Roosendaal on the other hand received after an extensive call on Facebook and Special Pokémonstickers on neighborhood watch signs one message inside. Pokemon Go player discovered on a Sunday afternoon someone was lying motionless in a cemetery under a tree. The victim appeared to sleep.

Across the country saw only a few cases in which players of the game really saw something startling. Baarn teenagers found a dead woman in a pond and Groningen two players caught a burglar.


On the other hand are often not registered or a notification is done by someone who was after a Pokémon, say spokesmen for various police regions. In the municipality Stichtse Fight instance called the police to go to a so-called Pokémongym in a parking lot where there were many car break-ins. 'It is not to trace the messages in 'Pokémonjagers' come from and what does not. We read that people went specifically to that place in response to our message. '