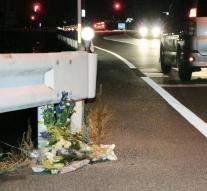 tokyo - A Japanese truck driver who played while driving game Pokemon Go, has killed a pedestrian and injured another woman.

The man was arrested for dangerous driving. He explained to the police to be distracted by the popular game.

A spokesman for the developer Pokemon Go, Niantic Inc. Says that a security module is built into the app, which from a certain speed checks if the player controls a car or not. He declined to say whether more security is built in response to this incident. He offered his condolences to the bereaved.


The popularity of the game caused all over the world nuisance and dangerous situations. Playing people are deprived of their phone and they stormed parks and beaches. In Guatemala was shot gamende a teenager when he broke into a house to catch a Pokémon.