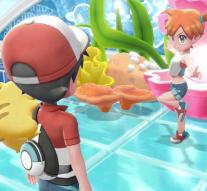 - The summer of 2016 was dominated by Pokémon GO. This mobile game that Pokémon \u0026 # x27; in real \u0026 # x27; to be caught literally took over the world and the resulting craziness will not have escaped you. Everywhere in the street players walked around young and old, with the aim of catching as many different Pokémon as possible.

Special Pokémon GO bus tours were organized throughout the country, everyone was in turmoil when there was a rare Pokémon somewhere. Kijkduin was even renamed the Pokémon capital of the Netherlands.

Meanwhile we are a few years further and although it seems like this craze has been blown over, this does not mean that Pokémon GO is old news. On the contrary, last summer the mobile game appeared again in the news because it had the highest number of active players since its launch in 2016. A praiseworthy performance, but not entirely surprising given the fact that Nintendo around that time with a big unveiling came out.

Nintendo, the publisher of the Pokémon game series, announced in late May two new Pokémon games for the Nintendo Switch. These games, Pokémon Let's Go Pikachu and Pokémon Let's Go Eevee, connect both in functionality and style to the popular mobile game Pokémon GO. The two new games will work in harmony with Pokémon GO, with which Nintendo not only reaches its loyal fans, but also players who have only played the mobile game so far.