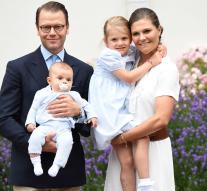 - Although the Pokemon Go hype has now passed, the gamehit of the year still seems popular at Haga Castle in Sweden. 'The hunt is on us quite out of hand,' Prince Daniel reveals in an interview that he gave to the Swedish newspaper Aftonbladet.

'It was not that the kids just sat staring at the screen, they did come with their bottoms of the bank' continues the father of the four-year-old princess Estelle and eight months old prince Oscar.

The 43-year-old husband of Crown Princess Victoria says he hunts with the children themselves on Pokemon. 'I wanted to understand the game and like to have it tested. Some people criticize the game, but it enables children to move it.' Prince Daniel says that the game helps him in his goal to turn every day 10. 000 steps.

Last summer Pokemon Go seemed the vacation of the royal family to disrupt the holiday island of Öland. Pokémon hunters around the royal summer residence Solliden Slott masse in search of the fictional creatures and were turned away by security.