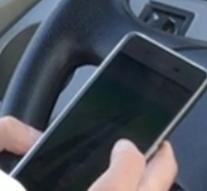 - A bus driver coach company Ringelberg Tours from Ridderkerk is supposedly summarily dismissed after the man has appeared in a video on Dumpert which shows that he plays behind the wheel Pokemon Go.

That leaves Laurens Boom, director of Ringelberg Tours, namely to Omroep West. The driver has a number of years in service and there have never been complaints about that man, Boom said. 'But we are professional drivers. This is unacceptable. '

The NS is not to talk about the images. The man was transported this week passengers between Leiden and Alphen aan de Rijn, because there are no trains.

The images provoke social media fierce reactions: 'Irresponsible behavior. Dismissal and a traffic definitely in place here,' says one. Another: 'As a person transporter hear not doing this just completely. '