Home / Tech / Pokémon back in Woerden 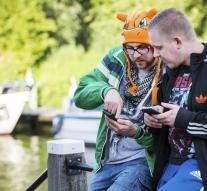 woerden - The Pokémon Go app was extremely popular last summer, but many fanatics removed the game slowly from their smartphone. Except in Woerden, where the Pokémon hunt seems to make a comeback.

Agents looked crazy yesterday when they saw a group of twenty-five players in the center who had a special eye on the mobile phone. The group told hunt to the blue bird Articuno. The police warned the hunting cyclists to be especially careful in traffic.

Neighborhood residents also identified Pokémonjagers at other locations in Woerden.