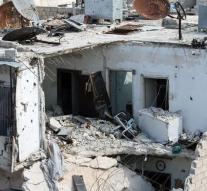 the hague - There are indications that Syrian troops have used poisonous gas in attacks on the city of Al-Lataminah in northern Syria. That is what Reuters press office has heard from circles around the Organization for the Prohibition of Chemical Weapons (OPCW). The attacks, using the nerve gas sarin, were on March 30 and seventy people were injured.

The victims had complaints about nausea, vomiting and muscle contractions. The OPCW investigated samples taken in the area. 'Analysis of the samples clearly shows the presence of sarin', it is called.

Syria has always used to deny poison gas. However, according to UN researchers, more than twenty times have happened.