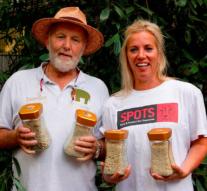 johannesburg - Rhinos, lions and elephants in Africa faster than thought to extinction by the illegal trade in ivory, horn, bones and other body parts, which generate a lot of money.

Talking about 180 countries on CITES world conference taking place this week in Johannesburg.

Dutch organizations for the protection of these wild animals perform as action to express their great concern. They belong to the so-called Big Five tourists have seen on safari. If later is no longer possible, the nature holidays will largely die out with all the consequences for the population and employment mean Marjo Hoedemaker (Elephant Foundation) and Simone Eckhardt (Stichting Spots).

Today they hand over tens of thousands of nails to delegations from South Africa, China and Vietnam in protest against poaching and exports to Asia. There is great demand for lion, rhino and elephant, as healing powers are attributed to, for example, cancer and impotence. Our nails made of the same fabric as the rhinoceros horn. Medically, which has no value, say Hoedemaker and Eckhardt to De Telegraaf.

De Luca tive market in countries like China and Vietnam should be broken down according to them. Among other through intensive education on the absurd nonsense of the traditional quackery that promises a beneficial effect on the animal parts. Unfortunately, millions of people continue to believe that in the year 2016.

The danger is that our grandchildren can see no Big Five in Africa, they warn. Worldwide, there are an estimated around 20.000 rhinos, lions and 20.000 and 350.000 elephants. There were forty years ago, three to four times as much. They are slaughtered in droves for commerce. This must stop, said Hoedemaker and Eckhardt.