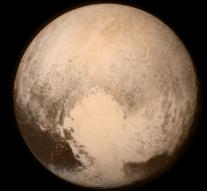 - "The dwarf planet Pluto makes its moon Charon red. Methane gas escaping from the atmosphere of Pluto, flows to the moon and freezes there. Sunlight then changes to red organic substances called tholines. Which accumulate millions of years. This ensures that the moon is red."

"American scientists have discovered. They looked at Pluto and Charon last year with the New Horizons probe, which flew past them.,, Who would have thought that Pluto is a graffiti artist who measure sprays with a red spot? '' Says researcher Will Grundy. Colleague Alan Stern says,, one of the biggest mysteries Charon '' has been fixed."