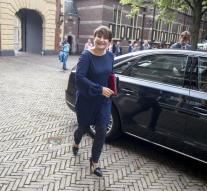 the hague - Minister Lilianne Ploumen (Foreign Trade and Development Cooperation) is on Monday at the United Nations in New York. She presents the Dutch progress towards goals agreed by 2015 by the 193 UN member states to eliminate extreme poverty in the world by 2030.

According to the minister, the Netherlands is generally good at tackling inequality and disadvantages, but there are also points that require extra effort. 'Like equal treatment of men and women. In particular, unequal salaries for the same work must be reduced, 'said the minister.

Ploumen travels to Washington this week, where she speaks among others with representatives of the World Bank.