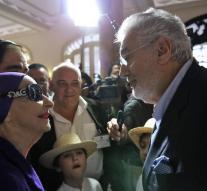 havana - The concert Placido Domingo Saturday would give the Cuban capital Havana is canceled because of the death of former leader Fidel Castro. The state proclaimed nine days of national mourning. During the period, no public events are held.

The 75-year-old Spanish tenor would occur at the Gran Teatro. At a press conference Friday, he said there is much to look forward to. The famous singer was never in Cuba on stage. That was an old wish. When that can now be filled is not yet known. Domingo's parents, who were acting and singing were already seen in the 40s and 50s on the island. He was welcomed with a program of their concert for the revolution.