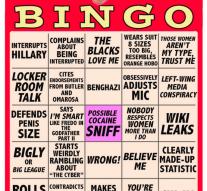 amsterdam - On the Internet has already become a popular game: the Trump bingo. With this game cross your regular statements or topics of the controversial US presidential candidate off.

In the game you can tick example he opponent Hillary Clinton is in the speeches during the debate or are happy to say that the black American population loves him. You can also tick when he defends the size of his genitals or insulted women.

The program Football Inside presenter Wilfred Genee played not so long ago a game with the same idea, but with statements from co-host Johan Derksen.