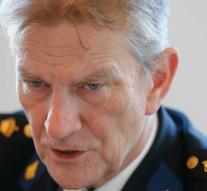 Plasterk is working on a afluisterwet, but refuses to listen to criticism, said Bits of Freedom. The minister received 57 percent of the vote. He defeated it the other candidates, insurer Achmea (offering customers a discount if they share their personal data, received 26 percent) and software giant Microsoft (saves user behavior with the new operating system Windows 10, got 17 percent).

The minister took his prize Wednesday in itself receives. He even gave " proud " to be to be there, but also to have his doubts. " I hope that you, as activists for privacy, deep in your heart also understands the role we have to play with the security for the safety of us all ", said Plasterk. " That the last ten years in the Netherlands no major terrorist attack occurred is not easy, safety must be constantly fought. " As a political boss of the AIVD have the minister " duty " to erode privacy when necessary for national security.

The National Police will receive the prize of experts known as predictive policing. Based on data detectives who think they can predict when can go wrong and who it can be a victim. " Not illegal behavior, but abnormal behavior is the basis of police ", explains Bits of Freedom.

The organization also awarded a prize for the biggest advocate of privacy. Who went to the Austrian Max Schrems. He recently won a historic lawsuit against Facebook. Thus Europeans of personal data should not be put just on servers in the United States.

The Big Brother audience award went last year to the then Minister Ivo Opstelten (Security and Justice). He 'won ' in 2011 and 2013.