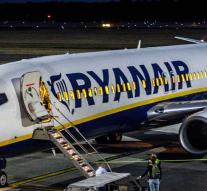 frankfurt - During an unscheduled stopover of a flight from Ryanair in Frankfurt from Dublin to the Croatian coastal town of Zadar, thirty people with health problems were taken to the hospital. It is not known what they are missing.

'Several people complained about health problems,' said a spokesman for the German police. 'They were treated by doctors after landing. '

The spokesperson could not yet say what caused the complaints. It is also not clear whether the plane landed because of the sick passengers or because something was wrong with the aircraft.