Home / World / Plane with 10 people on board disappeared 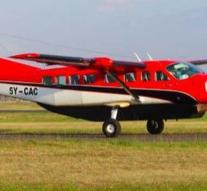 nairobi - A plane with ten people on board, two crew members, has disappeared from the radar on Tuesday in Kenya. The Cessna, according to Kitale's media, was on its way to capital Nairobi.

Air traffic control had the last contact with the aircraft when it flew about 50 kilometers north of Aberdare. After that nothing has been heard. It is feared that it has crashed. A search was immediately started, but it has now been discontinued. The rescue services resume their work when it becomes light.