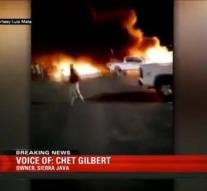 - In a crash with a 'flying ambulance' Elko died in the US state of Nevada are Saturday four people.

The aircraft, including a patient and three crew members, drilled by unknown causes in a car park just northwest of the regional airport. The four passengers left their lives. Whether it had established an aircraft landing or whether it had just taken off, is not yet known.

Miraculously hit in the crash on the ground no one injured, reports Fox News.