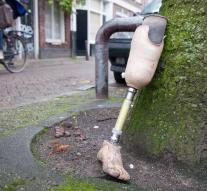 zeist - Hospitals want to make the personal risk in care easier. If it is at the Dutch Association of Hospitals (NVZ), patients will pay a fixed amount of 150 euros for a large number of simple hospital treatments. Chairman Yvonne van Rooy presents the plan on Friday on the format table via an opinion poll in the Dutch newspaper.

The NVZ finds out of its own risk undesirable. But it should be simpler, Van Rooy believes. Patients often find themselves unclear about the price of treatment for a long time. Care notes often come with a big delay.

The hospitals want to draw up a list of relatively simple treatments that cost 150 euros at a cost to patients. Even if they are actually more expensive. For follow-up agreements, no additional deductible will be charged in the plan if within 120 days.

Van Rooy gives an example of a major wound attached to the hospital, after which another check-up will be followed. The actual costs are 258 euros in the fictitious example, but the patient pays no more than 150 euros from his own risk.

According to a NVZ spokesperson, health insurers are positive about the idea. But to make it possible, a system change is necessary. 'It must be regulated by politics. '

From an initial estimate it would appear that the plan will cost the insurers around 15 million euros. But how expensive it will be will depend on which treatments will be on the list.

The minimum own risk is currently 385 euros per year. The NVZ plan would not change anything. The association finds its own risk in general 'a too important pillar under the solidarity of our care system to be coarse. '