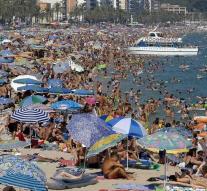 benidorm - North Korea is planning to launch a southern Spanish-style spa town. A delegation from the isolated and stalinist ruled country made a trip along the Spanish coast to gain inspiration. A spokesperson for the North Korean Embassy in Madrid confirmed this according to the British newspaper The Telegraph.

The North Koreans have also been in a camp where, according to their Spanish companion Matías Pérez, they asked detailed questions about everything about the camping company. But they were especially impressed with the 'dimensions of the tower flats and holiday parks' in Benidorm.

The delegation also joined the Terra Mítica theme park in the same place. But the northernmost resort of Marina d'Or, at Orpesa, hit everything in the North Korean eyes. This complex was most similar to what the North Koreans would like in Wonsan.