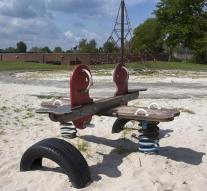 - In almost all playgrounds in the Netherlands is still puffing away by the elderly.,, It is in this place is non-smoking the norm. The lungs of young children are still vulnerable and developing. Besides butts on the ground, the risks are mainly passive smoking and example: see smoke, smoking does, '' said Long Fund Director Michael Rutgers.

According to a survey of 1,100 people, conducted by TNS NIPO, is more than three quarters of people in the Netherlands in favor of smoke-free playgrounds. Also, smokers see the logic: only a quarter of them from. The government sets currently not mandatory smoke-free playground.

Only a handful of playgrounds is actually smoking. In countries like France, England and the United States is the non-smoking playground standard.,, For the health of our children can you be jealous of his '' says Rutgers.


Long Fund has developed a roadmap to include municipalities and playgrounds that enable them to get to work for a smoke-free playground.