Home / World / PKK threatens to step up fight after arrests 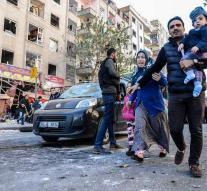 ankara - The Kurdish militant movement PKK angry and reacted with threatening language to the arrest of twelve MPs from the Turkish-Kurdish party HDP. Commenting on the arrests is inevitable, said a senior commander of the group in a video released Friday.

He stated that the PKK will intensify the fight against Turkey.

The arrested MPs suspected of ties to the militant PKK. They would have, among other things ' guilty of terrorist propaganda '.

Among those arrested are also the two chairmen of the HDP. Both the EU and several European governments, including the Dutch, have expressed major concerns about picking up the politicians.