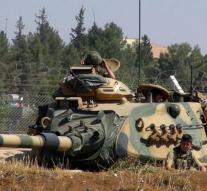 diyarbakir - In battles with fighters of the outlawed Kurdistan Workers Party PKK are Saturday five slain Turkish soldiers and six injured. The fighting took place in the Hakkari province in southeast Turkey. The soldiers guarding during an operation against PKK fighters a road in the district of Semdinli when they were attacked, so let security know.

Turkish security forces reported in the night from Friday to Saturday although eight deaths on the Turkish side and eleven on Kurdish side in Van province, near the border with Iran. The fighting between the Turkish army and the PKK have flared since the violation of the cease-fire in July 2015.