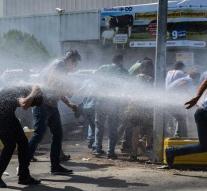 - "Air attacks in southeastern Turkey have taken the past two days to sixteen suspected Kurdish rebels life. That have sources said the Turkish authorities Wednesday."

"The bombs were dropped on targets in the province of Hakkari, near the Iraqi border. Seven people were killed Wednesday. A day earlier, nine suspected PKK fighters and were also destroyed a hideout and a munitions depot, according to the Turkish army."