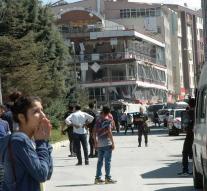 "That have sources said the Turkish security forces Tuesday."

"Fighters of the PKK on Monday brought a car bomb exploded at a number of government buildings in the eastern city of Van. No one came, or fifty people were injured."