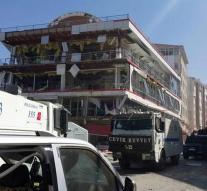 - "The bombing on Monday in the center of the Turkish city of Van is the work of the extremist Kurdish PKK. The Kurdistan Workers 'Party, as the movement's full name, wanted revenge for the dismissal of dozens of Kurdish mayors in southeast Turkey " and the murder of Kurdish youths'."

"The Turkish authorities replaced the mayors Sunday by observers store,, without regard for the will of the Kurdish people, '' says the PKK statement. The mayors played according to Ankara in cahoots with the Kurdish terrorist group PKK."

"Erdogan came to a cease-fire line with the PKK in 2013. The peace process that has since unfolded, miscarried last year under the influence of the Syrian civil war."

"From located in the far east of the country. The Kurds make in those parts a large majority of the population."