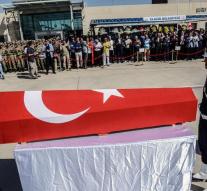 - The PKK has claimed responsibility for a bombing in the Turkish city of Elazig. The car bomb exploded at a police station. Three policemen were slain Thursday and 217 people were injured, including 85 officers.

The attack occurred just hours after elsewhere in the region were also three deaths by a similar attack. The Turkish defense minister already pointed directly to the PKK.