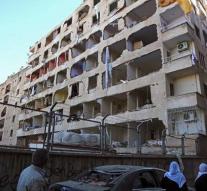 ankara - The bombing in the eastern Turkish city of Diyarbakir, where eleven people were killed and more than a hundred people were injured, the work of Kurdish fighters were not of IS. So says the local governor.

According to the IS-IS news agency Amaq demanded Friday or on the bombing. But according to the governor of Diyarbakir, who quoted wiretapped conversations between PKK militants, it is 'obvious' that the car bomb was the work of the outlawed Kurdistan Workers' Party PKK.

That said, the Turkish Prime Minister Binali Yildirim immediately after the attack Friday. One of the perpetrators was slain in the attack and was probably a member of the Kurdistan Workers' Party (PKK), said Yildirim.

The attack followed the arrest of eleven Kurdish MPs, including the two chairmen of their People's Democratic Party (HDP).