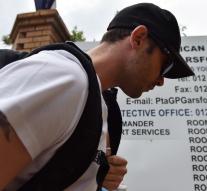 - The highest Court of Appeal of South Africa condemned the former paralympic athlete Oscar Pistorius murder. An earlier ruling by a court that he was guilty of manslaughter was thus rejected. Chief Judge Eric Leach read the verdict on Thursday in Bloemfontein.

Pistorius killing his girlfriend Reeva Steenkamp with four shots through the door of the bathroom. He is known to have shot, but said he thought there was a burglar behind the door. He was acquitted of murder in the first instance. Further, he received a suspended sentence for illegal possession of firearms. Justice appealed against.

Murder is in South Africa a minimum sentence of fifteen years in prison. A lower court is instructed to determine a new sentence.