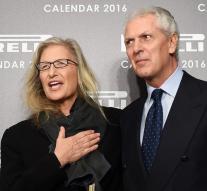 - The world famous Pirelli Calendar must put it in the version of 2016 without nude models. The calendar first appeared in 1964. Over the years, many famous women appeared naked in the months and on the cover of the calendar.

Coming year many famous women have been portrayed by photographer Annie Leibovitz, which in 2000 suffered already supplied the photos. Among the thirteen women who participated this time as model, now includes 82-year-old Yoko Ono, the 68-year-old punk singer Patti Smith, tennis player Serena Williams, Russian Natalia Vodianova and American actress Amy Schumer. Leibovitz said after taking the pictures that the naked version which she had been made ​​a lot easier in 2000 than the dressed-up version of 2016.
NEW