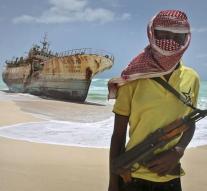 - A group of Asian seafarers who was robbed was released by Somali pirates more than four years ago. That the Somali authorities and Oceans Beyond Piracy (OCP), an organization that fights piracy, announced.

It involves a total of 26 people from Cambodia, China, Philippines, Indonesia, Taiwan and Vietnam. Their ship was hijacked near the archipelago of Seychelles in March 2012. Originally the group consisted of 29 people. One came during the hijacking and to two succumbed later to disease, says OCB. The freed hostages arrived in Kenya on Saturday afternoon.

Whether ransom for the hostages paid is unclear.