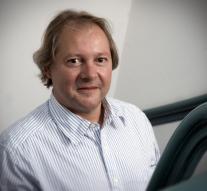 - Job Witteman, founder of Dutch internet node AMS-IX, leaves the company. He is one of the driving forces behind high-quality Dutch web connections.

Thanks to AMSX-IX, Amsterdam and the Netherlands got a fast network, accessible to foreign companies. Large Internet companies and data centers received consultation on this network through consultation. AMS-IX is the largest internet junction with nine hundred affiliated companies, with seven internal platforms connected.

Under Witteman, the company's revenues increased rapidly by 15%. AMS-IX is seen as the third major gateway to the country, after the ports and Schiphol.