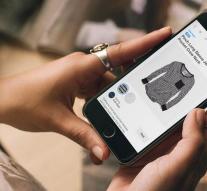 Instapaper allows users to save web pages to read later. The app was built in 2008 by Marco Arment, was one of founders of Tumblr. In 2013 he sold the app to the company Betaworks. Instapaper is similar to the Pocket popular in The Netherlands.

Pinterest focuses on storing pictures that users find on the web. They can use various 'pinboards' with different themes for example. Pinterest was founded in 2009.


Pinterest want to know among others to apply search technology Instapaper into his own service, let product manager Steve Davis Pinterest to Engadget.