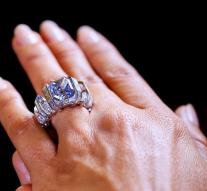 geneva - At Sotheby's in Geneva has a pink diamond Wednesday raised an amount of 20.8 million dollars (19.5 million euros). To the surprise of the auction was not the 'Blue Sky Diamond' sold for the highest amount, but the pink stone of 17.07 carats.

Previously it was estimated that the pink diamond could fetch around 14 million euros. The blue jewel estimated an expert the sales at 25 million dollars (23.4 million euros). The blue diamond was sold for $ 17.06 million (15.9 million euros). According to the auction the gem had the intense color 'Fancy Vivid' that has only one percent of all diamonds.

The demand for colored gemstones has risen sharply this year. In auction houses, they are increasingly under the hammer, Christie's announced. ' There are fewer mines, where they find these diamonds, '' said a spokesman for the auction house. ' Why these gemstones are becoming more valuable. ''