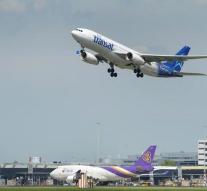 glasgow - Two pilots have been arrested on the Scottish Glasgow airport because they were under the influence of alcohol. That happened just before they get behind the stick of a certain flight with 250 passengers to Canada, according to British media Tuesday.

Employees had pulled the alarm because they were concerned about the behavior of the pilots. Police arrested the pilots of 37 and 39 then. The Canadian airline Air Transat confirmed that the two were arrested and reported that the flight to Toronto was postponed for the Airbus A330.