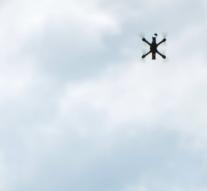 amsterdam - A pilot of KLM on Liberation Day 5 kilometers altitude seen a drone. The unmanned plane flew a few hundred meters from the plane, confirmed Thursday a spokeswoman for Air Traffic Control the Netherlands (lvln) after notification of the NIS.

The pilot of the Airbus A330-200 made mention of the drone around 07. 15 pm on May 5, when he flew near Zwolle.,, The KLM pilot said the drone 300 to 450 meters below the plane and flew 500 meters away from it, '' said the spokeswoman. Lvln explained in response to the notification, the Aviation Police, but the drone and its owner could not be traced.

It is not the first time that a drone is signaled in the Netherlands near an airplane or airport. A group of airlines and organizations last month sent an urgent letter on the issue to State Secretary for Infrastructure Sharon Dijksma.


Dijksma allowed its wish to tighten the rules for drones. As drones may soon fly up to 50 meters. In addition, the government talking to drone builders geofencing, which a particular area is defined using GPS. In this way, it is impossible for drones for example, to come in the vicinity of an airport.