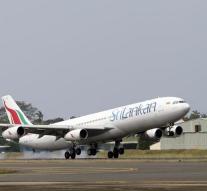 frankfurt - A pilot of SriLankan Airlines reported recently drunk at Frankfurt Airport in Germany for his long-haul flight to Colombo. The man was stopped when the cabin crew had beaten alarm, German media said Sunday.

On board the plane were, according to airport operator Fraport 259 passengers and 15 crew members. The pilot has been made inactive. This decision was taken after the result of the alcohol test.

Flight UL554 was originally on Friday at 15. 20 hours from Frankfurt to leave for Sri Lanka. But the plane continued to the incident are on the ground, confirmed a Fraport spokesman.


Match Saturday morning at 6. 35 the device could leave yet. The passengers spent the night in hotels. The airline apologized on the Internet and announced that passengers receive compensation.