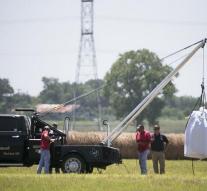 - The pilot of the hot air balloon which crashed Saturday in Austin in the US state of Texas, has previously been in jail since his car was under the influence of alcohol and drugs. At the crash all sixteen passengers were killed.

Alfred Nichols was sentenced according to AP news agency in recent years, at least four times for driving under the influence in the state of Missouri. The man was trapped for more than a year for a drug offense. In 2013 he was additionally charged with an incident with a balloon. Nichols had time to make an emergency landing because he was too little propane had. One of the passengers complained to him for this. The case never came to trial because Nichols reached a settlement of the passenger.

Although the authorities have not yet officially confirmed that Nichols was the pilot of the balloon, local media reported that relatives and friends of the bereaved appoint him as manager.


The balloon caught fire mid-air and crashed in a pasture. Presumably the balloon hit power lines.