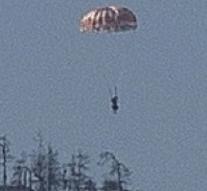 - One of the two Russian pilots who shot down Tuesday from their airplane jumps, is picked up by the Syrian army and returned to the Russian base in the country.

That said Russian ambassador to France Wednesday against Europe 1.

" One of the pilots was injured when he was hanging on his parachute. On the ground, he was killed in a brutal manner by jihadists, " said Ambassador Alexandre Orlov. " The other one managed to escape and according to the latest reports are picked up by the Syrian army. He now goes back to the Russian airbase.