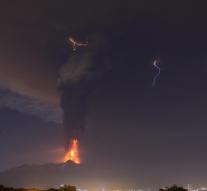 - Etna knew this week one of the largest eruptions of the past two decades. The volcano in Sicily vomited spectacularly ash and lava, which led to beautiful pictures.

What the above pictures and see video below right, is a so-called " dirty thunderstorm. This rare phenomenon is caused by static electricity, the ash plume.