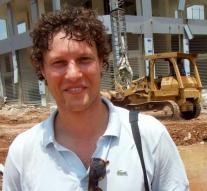 amsterdam - In the Zuiderkerk in Amsterdam Thursday held the funeral service for Jeroen Oerlemans. The 46-year-old war photographer was shot dead in Libya on October 2 IS by a sniper terror movement. Oerlemans was wearing a bulletproof vest, but was nevertheless struck fatally in his side.

At the service a few hundred people were present. His wife had asked colleagues in journalism as a friend or colleague to come to the funeral. The media was asked great restraint.

'Jeroen by family, friends and acquaintances remembered as a warm, engaging and committed guy with a great sense of humor, an eye for detail and an undivided attention to everything he loved and stood for,' said one of the speakers. His motto was repeated: everything is possible, as long as it is made fun.

'In the photojournalism Jeroen had found his calling. Using his camera he wanted to show the harsh reality in crisis areas to the rest of the world, 'said another speaker.

After the service, around 14. 30 pm, Oerlemans was past a guard of honor with white balloons to his final resting place, brought to the Amsterdam Zorgvlied cemetery.