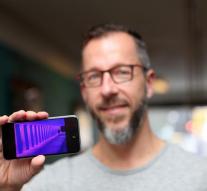 dordrecht - He is of course very complicated argue hang about how his artistic photographs came about, but Peter Paul van der Hout (45) from Dordrecht is there not the man: 'It was just a lucky shot.' His photographs of Mars Tunnel in Zutphen nevertheless goes on giant billboards all over the world.

Apple has the picture namely bought for a global campaign for the iPhone 6s. The billboards of a sloppy five to twelve meters hanging in include the US, Canada, Asia, China and closer to home in Paris and London.

By visiting Van der Hout end touched Hanseatic city of Zutphen last year enchanted by the magical appearance of the Mars Tunnel, the latest project by light artist Herman Kuijer. 'I had a picture of my girlfriend in that tunnel and put on Flickr. What I do with all my iphone photos do, so I backed up I immediately. '


Which he was promptly approached by an advertising agency in London. Or they could use photographs for a campaign. For what exactly, she could not tell yet. When Van der Hout googled the name, he was found to have a reputable agency to do. Which he anyway entered into a contract.

He emphasized that the photo was a complete fluke. 'That tunnel ie, every thirty seconds, different colors. While Apple advertising campaign which was looking quite consciously for a photo with red as the main color. So if I slightly earlier or had been later, the tunnel had a different color and they had not had anything to my pictures. '

IPhone photos totaling seventy photographers are now used for the Apple campaign. 'Rich you can not get in, but it did 450 British pounds on. Not wrong. Though I had also worked for a few bucks. It concerns me most about the honor. Some photographers use the most expensive equipment and I'll be there as cake baker with such iPhonetje... '


Apple wants the campaign especially demonstrate the capabilities of the iPhone 6s. 'I found it amazing that such a simple picture 'powerful' enough for a huge billboard. All I had to ensure that I picture indeed had made with my iPhone. As the whole contract legally completely boarded. Also, for example that the model gave permission for use on the picture. No, my girlfriend did not difficult, but she wanted a natural part of the proceeds, she laughed all 'Van der Hout, however, solves that by payment in kind'. Yeah, haha, it'll be dinner. '