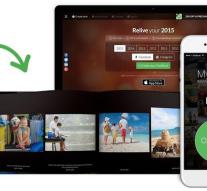 - The Amsterdam company Does Facebook have the 'My Year' app launched. This app (iOS) allows users to get a full year of photos from Facebook or Instagram directly into a digital book. Also, a bound book in print as possible.


Consumers can make their digital photo book in less than sixty seconds. Unlike Facebook's Year in Review, which focuses on the past year, My Year allows the user to convert any date into a book. For Facebook, this means from 2003 until 2015. Instagram applies the period from 2010 to 2015. The Year My app retrieves all the right pictures and descriptions of the selected year. After this is directly a digital photo album presented where the user can scroll through.
'We share more than 1. 8 billion photos per day on social media, but most of these pictures disappear into the digital black hole,' said Stefano Cutello, director / founder of Past Book. 'Digital books are popular, but it takes time to create. Most people simply give it up. We want to make the recall of pictures as easy and fast as possible. '
My Year is trying to differentiate itself from Facebook's Year in Review by speed and convenience. The Facebook service will automatically select up to 10 photos from the collection of posts that have been made. There are also some pictures to which the user is tagged. That choice the user has no influence. My Year in can. With Instagram, the user can make a digital book. Both Facebook and Instagram do not offer print capabilities.
Past Facebook has also announced that a new 'seed' investment of $ 380. 000,- has attracted several private investors and Vortex Capital Partners. This brings the total funding to $ 870. 000. Past Book is currently fetching Series A investment.
NEW